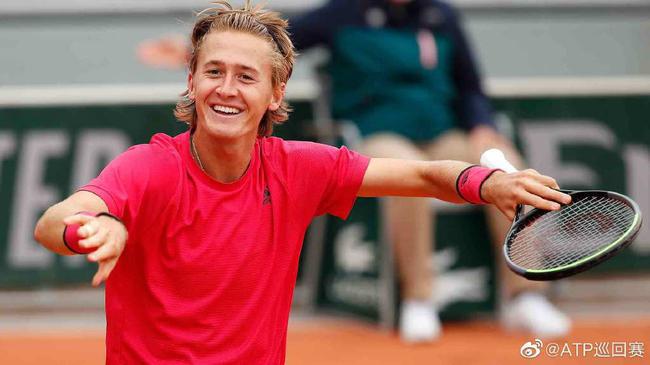 Last night, the French Open continued to compete for the third round of singles. The post-00 player Sebastian Koda from the qualifying round was upset to advance to the top 16. Next he will challenge his idol Nadal. As a little fan, Keda even named his cat Rafa, "Rafa (Nadal) is the main reason I play tennis. He is my biggest idol."

Sebastian Kodak, born in 2000, is the son of former Grand Slam champion Pete Kodak. Old Kodak won the Australian Open in 1998 and reached the French Open men's singles final in 1992.

But Koda’s idol is not his father, but Nadal. “Rafa is an incredible opponent. He has the spirit of never giving up.” When he was very young, Koda had been with his idol Nadal. Dahl had a group photo. Now, Xiao Keda also has the opportunity to face to face with idols.

In the third round of the men's singles that ended last night, Koda, who played in the qualifying round, beat Martinez 3-0 to reach the top 16. Before coming to Paris, Kodak hadn't even won a tournament victory, but now he has achieved the biggest breakthrough of his career in the French Open. Kodak, ranked No. 213, also became a player outside the TOP200 of the top 16 of the French Open for the first time after Pascual ranked 283 in 2002.

When Koda reached the round of 16, the match between Nadal and Travaglia was not over, "I pray that Rafa will win." Koda said that Nadal is his main reason for playing tennis, and is also his biggest. Idol, "Whenever I'm on the court, I want to be like him. I also named my cat Rafa, which shows how much I like Rafa."

Nadal did not disappoint Koda, 6-1, 6-4, 6-0 to send eggs and sweep Travaglia, winning the 96th victory in Roland Garros. When asked after the game about the match against Koda, Nadal smiled and said it would be very interesting, "Becoming his idol also means that I have been on TV for too long. I am 34 years old. Nadal said that the power of idols can encourage young people to move forward, just as he liked Sampras, Agassi and Moya when he was a child. "I know Sebastian (Little Koda) played very well. Well, he is still a young child. I think he will have an amazing future, but I hope he has not yet."

Kodak, with the label of "Net 2", did not have too many amazing performances before. Although his father is a tennis Grand Slam champion, Koda's two sisters are now professional golfers. Only he insists on playing tennis with the encouragement of his father. "My career goal is very simple. Slam, one more than my father, this is what I have to work hard for."